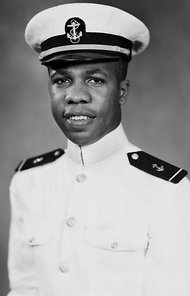 June 3rd, in 1949, Wesley A Brown graduated from the US Naval Academy, becoming the first African American to do so.

The Annapolis Naval Academy had never, before this date, witnessed an African American succeed beyond the first academic year. Brown received his commission as a naval officer on this momentous occasion, joining one of society’s most elite professions. Brown’s achievement is even more notable considering the navy had only commissioned its first ever African American officers, a group known as the Golden Thirteen, five years earlier during the Second World War. Less than a year before Brown graduated, President Harry S. Truman desegregated the military through Executive Order 8802, meaning Brown would spend his entire career leading sailors of all races, something previous African American officers could not claim.

Born in a working-class family on April 3, 1927, in Baltimore, Maryland, Wesley A Brown received an early introduction to the US Naval Academy. During the Second World War, a teenaged Brown found work as a mail sorter for the navy. Several naval officers befriended Brown, informing him of the rigid, but intellectually stimulating, requirements to become an officer. As a result, Brown began considering a career as a naval engineer. Aspiring to enter the Annapolis Naval Academy, the teen began taking advanced math courses and participating in the high school military cadet program.

High School and Beyond

After attending Dunbar High School, Brown joined the Army Reserves and spent a year at Howard University, a historically Black college in Washington, D.C., where he studied electrical engineering. Though he still dreamed of going to the US Naval Academy, Brown could see no way to acquire the necessary recommendation from a member of Congress. Fortune came, when Adam Clayton Powell, the African American Congressman from New York City, announced a desire to appoint a member of his race to Annapolis. Brown contacted Congressman William Dawson of Illinois, a family friend, who provided the necessary introduction. In 1945, Powell, based on Brown’s solid academic and personal records, recommended him for appointment to the Naval Academy. That summer, Wesley A Brown joined the other midshipmen, the name given to Academy students, to endure the intense physical, academic and ethical training needed to prosper as a naval officer.

The US Naval Academy

Life could be difficult for any midshipman and even more so for a racial minority in pre-Civil Rights Movement America. George Trivers, an African American who had entered the Academy in 1937, warned Brown of the hazing rituals that seemingly intensified for African American candidates. Regardless, Brown remained determined to attend. At the Academy, the new midshipman experienced no unbearable hazing. Most of the other students either ignored the African American or were cordial. Despite offers made by several midshipmen to share a room, Brown chose to room alone to avoid creating possible problems for his white friends. After four years of study, he earned a Bachelor of Science in Mechanical Engineering.

After receiving his commission along with 789 other Academy graduates, Ensign Wesley A Brown set off for what would become a twenty-year career in the Navy Civil Engineer Corps. Earning a Masters in Chemical Engineering from the Rensselaer Polytechnic Institute in 1951, Brown went on to be responsible for engineering projects across the globe. His achievements include constructing roads in Liberia, building houses in Hawaii and managing the facilities of entire naval bases. He retired in July 1969 as a lieutenant commander and went on to serve on the faculty of Howard University. To honor its first African American graduate, the US Naval Academy named its state-of-the art athletic facility the Wesley A Brown Field House in 2008. Brown died in Silver Spring, Maryland, at the age of 85, on May 22, 2012.