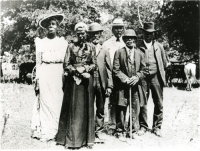 June 19, 1865, or Juneteenth, was the day the African American slaves in Texas received notice by Union Major-General Gordon Granger that they were forever free.

President Abraham Lincoln, assassinated earlier in April of that year, had signed the Emancipation Proclamation that went into effect on January 1, 1863, freeing all the slaves in the rebellious Southern states. Slaveowners in Texas, and all other Confederate states still waging war against the Union, steadfastly refused to acknowledge any orders issued by Lincoln proclaiming the end of slavery. The African Americans in these areas had no idea about the end of slavery. Even after the Civil War concluded, with the defeat of the Confederacy over two years after the Emancipation on April 9, 1865, slaves throughout the region remained unaware of their newly granted freedom. Galveston, Texas, where Gordon read General Orders Number 3, acknowledging the freedom of African Americans established by the earlier Proclamation, was one of the last areas to receive the word of the end of slavery.

Most African Americans received a shock by the news of their emancipation. General Orders Number 3 declared the former slaves equal to their former masters. All were now equal in terms of rights. African Americans were no longer regarded as property but now able to own material property themselves. Hearing word of their freedom from enslavement was a joyous moment for African Americans.

Many African Americans, having never traveled outside the bounds of their plantations, simply left to seek out the meaning of freedom. Others walked long distances desperately searching for any information about family members and loved ones sold away to other plantations, counties or states. Soon it became obvious to them that freedom would be difficult, for they had little in material resources, such as money. Most settled down to perform work very similar to what they had done during slavery. Though many experienced hard times, they remained optimistic. Juneteenth, freedom day in Texas, the day of jubilation, remained a source of inspiration and hope for a better tomorrow.

The first celebration of June 19, the end of slavery, as a holiday, came the following year in 1866. Throughout the remainder of the 19th century, African Americans marked the freedom day with parades, speeches and food. Originally, the holiday remained insular to Texas, but soon African Americans in nearby Arkansas, Louisiana and Oklahoma joined the festivities. From its inception in 1866 until the early 1940s, when the personal memories of Emancipation began to wane, celebrations were fairly consistent. There was in the following period of decline one notable event held in 1950 at the Dallas Texas State Fair. In general, however, Juneteenth, freedom day, became a distant memory.

During the 1970s, in the wake of the Civil Rights and Black Power movements, African Africans sought to demonstrate appreciation of their heritage by again holding Juneteenth celebrations. Official recognition of freedom day began as well; for example, the Texas State Legislature declared June 19 a state holiday beginning in 1980. Al Edwards, an African American state representative, proposed the bill establishing the holiday.

Since the period of reawakening, Juneteenth celebrations have become a nationwide occurrence. Some of the largest events take place in the North, ironically.