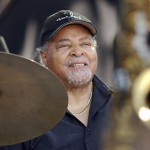 Cobb taught himself to play the drums. From 1958 to 1963, he played with Miles Davis, performing on albums such as “Kind of Blue” (1959) and “Sketches of Spain” (1960). He also worked with many other jazz greats, including Dinah Washington, Cannonball Adderley, Hank Jones, and Nancy Wilson.