By Chimsima Zuhri on May 16, 2013 in African American History, May, Music 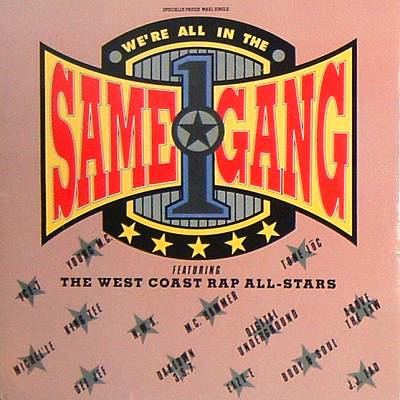 “We’re All in the Same Gang” was a single by the West Coast Rap All-Stars, a coalition of prominent west coast hip-hop stars who came together to preach the word of unity, and raise funds for inner-city youth projects. The list of participants is impressive — Dr. Dre, Quincy Jones III (son of the famous Quincy Jones), and Bilal Bashir are among the producers, and the rappers include Ice-T, Tone Loc, MC Hammer, King Tee, Young MC, Def Jef, and members of N.W.A, Digital Underground, Oaktown’s 357, and Above the Law.

The album’s title, which also reached number 35 in the Billboard charts as a single, referred heavily to the gang warfare in areas like South Central and Compton. A touch ironic, perhaps, when so many of the contributors were perceived by ‘outsiders’ as having exacerbated these problems with their gangsta rap mythology. On the B-side was the “Radio Special” version of the single (trimmed down to 4 minutes with the exclusion of Def Jef, Above The Law, JJ Fad, Oaktown’s 3.5.7 and MC Hammer), and the song “Tellin’ Time (Mike’s Rap)”, produced by Shock G and featuring Dr. Dre and Michael Concepcion, an executive producer of the project. N.W.A., Michel’le, Above the Law and J.J. Fad were all signed to Eazy-E and Jerry Heller’s Ruthless Records. Though some of the material is fun and escapist, the CD’s overriding theme is a sociopolitical one — inner-city residents are encouraged to unite and put an end to black-on-black crime.

The most compelling tracks include the title song, the South Central Posse’s “Livin’ in South Central L.A.,” and MC Supreme’s “Black in America.” Although generally enjoyable, the album on the whole isn’t the all-out gem it could have been — some of the songs are excellent, while others are merely decent. But while We’re All in the Same Gang isn’t perfect, its historic value is undeniable. In 1988, violence at rap concerts and black-on-black crime inspired Boogie Down Productions leader KRS-One to found the Stop the Violence Movement and produce the all-star single “Self Destruction.” That project was dominated by East Coast rappers, and some Californians wondered why more West Coast rappers hadn’t been asked to participate. They reasoned that because black-on-black crime was not as serious a problem in L.A. and Oakland as it was in New York, more West Coast MCs should have been part of Stop the Violence. So in 1990, some of California’s top rappers formed the West Coast Rap All-Stars and recorded We’re All in the Same Gang, which became California’s equivalent of Stop the Violence. In 1991, the song was nominated at the 33rd Grammy Awards for Best Rap Performance by a Duo or Group.