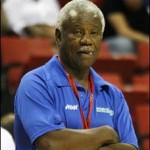 Richardson played college basketball at the University of Texas – El Paso and earned his Bachelor of Arts degree in 1964. He began his coaching career in 1968. In 1978, he moved to Western Texas Junior College where he won the 1980 National Junior College Championship. In 1981, he moved to the University of Tulsa and won the 1981 National Invitation Tournament Championship.

In 2008, he was inducted into the National Collegiate Basketball Hall of Fame. In October, 2009, Richardson was named head coach of the Tulsa franchise (formerly the Detroit Shock) in the Women’s National Basketball Association, a position he held until 2011. Nolan Richardson Middle School in El Paso, Texas is named in his honor. His biography, “Forty Minutes of Hell: The Extraordinary Life of Nolan Richardson,” was published in 2010.