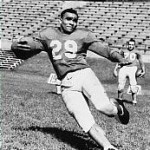 Bright played college football at Drake University where he led the nation in total offense in 1949 and 1950. On October 20, 1951 in a game against Oklahoma State University, Bright was violently assaulted by white football player, Wilbanks Smith. During the first seven minutes of the game, Bright was knocked unconscious three times by blows from Smith. The final blow broke Bright’s jaw and he was eventually forced to leave the game. A six sequence photograph of the incident was captured by the Des Moines Register newspaper and it showed that the final blow was delivered well after Bright had handed the football off.

That photographic sequence won the 1952 Pulitzer Prize for Photography and later made the cover of Life Magazine. After the game, Oklahoma State and conference officials refused to take any disciplinary action against Smith. Bright went on to earn a Bachelor of Science degree in education from Drake in 1952 and was selected by the Philadelphia Eagles in the 1952 NFL Draft. However because of concerns regarding the racial environment in the National Football League, Bright elected to play for the Calgary Stampeders of the Canadian Football League.

Over his 13-season professional career, Bright led the league in rushing three times and was the 1959 Most Outstanding Player. He retired in 1964 as the CFL’s all-time leading rusher. After football, Bright worked as a teacher, coach, and school administrator until his death on December 14, 1983. He was inducted into the Canadian Football Hall of Fame in 1970 and posthumously inducted into the College Football Hall of Fame in 1984. In 2005, Oklahoma State University formally apologized to Drake University for the incident and in 2010 the Johnny Bright School opened in Edmonton, Canada.