By Chimsima Zuhri on June 20, 2011 in African American History, June 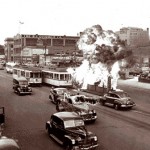 June 20, 1943 The Detroit Race Riot began with a fist fight between a black man and a white man on Belle Isle.

The fight eventually grew into confrontations between groups of blacks and whites, spreading into the city. Rumors that black women were being assaulted and white women being raped fueled the confrontations. Stores were looted and buildings burned, primarily around the black section of town called Paradise Valley.