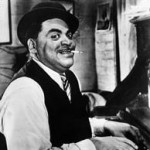 Waller was born May 21, 1904 in New York City. He started playing the piano at the age of six. At the age of 14, he was playing the organ at Harlem’s Lincoln Theater and within 12 months had composed his first song. Waller was one of the most popular performers of his era, finding critical and commercial success in the United States and Europe.