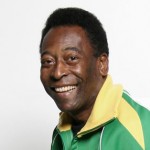 October 23, 1940 Edison Arantes de Nascimento (Pele), one of the greatest soccer players of all time, was born in Tres Coracoes, Brazil.

Pele began playing for the Brazilian national soccer team at 16 and won his first World Cup, the international championship of soccer, at 17. Pele’s technique and athleticism has been universally praised and during his playing years he was renowned for his excellent dribbling and passing, powerful shot, and prolific goal scoring. He is the all-time leading scorer of the Brazil national team and the only player to be part of three World Cup winning teams.

Since his retirement in 1977, he has been a worldwide ambassador for soccer and a vocal supporter of policies to improve the social conditions of the poor. The International Olympic Committee has proclaimed Pele “Athlete of the Century” and in 1999 Time Magazine named him one of the 100 Most Important People of the 20th Century. In 1993, Pele was inducted into the American National Soccer Hall of Fame and in 2000 he received a Lifetime Achievement Award from the Laureus Academy. In Brazil he is considered a national hero.

Pele published his autobiography, “My Life and the Beautiful Game: The Autobiography of Pele,” in 1977.