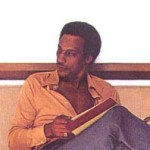 After serving in the United States Air Force, Bristol recorded several singles before his label was absorbed by Motown Records in the mid-1960s.