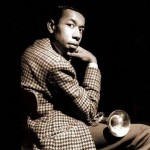 Morgan was born July 10, 1938 in Philadelphia, Pennsylvania. Morgan received his first trumpet at the age of 13 and at 18 joined Dizzy Gillespie’s big band where he was a member for 18 months.

In 1958, he joined Art Blakey’s Jazz Messengers and was featured on a number of their albums. As a leader, Morgan recorded 30 albums, including “The Sidewinder” (1963), his most commercially successful album, “Cornbread” (1965), and “The Last Session” (1971). In the last two years of his life, he became more politically involved, becoming one of the leaders of the Jazz and People’s Movement which protested the lack of jazz artists as guest performers and members of the bands of television shows.

Morgan was posthumously inducted into the Down Beat Jazz Hall of Fame in 1991. His biographies include “Lee Morgan: His Life, Music and Culture” (2006) and “Delightful Lee: The Life and Music of Lee Morgan” (2008).