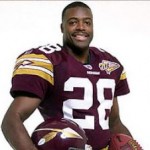 Green played college football at Texas A&M University where he was a first team All-American and earned his Bachelor of Science degree in 1983.

Green was selected in the first round of the 1983 NFL draft by the Washington Redskins and over his 20 season professional career was a four-time All-Pro selection and two-time Super Bowl champion. In 1996, he won the Walter Payton Man of the Year Award for his volunteer and charity work and in 1997 he won the Bart Starr Award for outstanding character and leadership on the field and in the community.

In 1988, Green founded the Darrell Green Youth Life Foundation, a faith-based organization with the mission to “meet the needs of children, their families and the communities in which they live.” Green retired in 2002, was selected to serve as the chairman of President George W. Bush’s Council on Service and Civic Participation in 2003, was inducted into the College Football Hall of Fame in 2004, and in 2008 was inducted into the Pro Football Hall of Fame. A section of State Route 28 in Loudoun County, Virginia is named Darrell Green Boulevard.