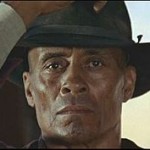 Strode was born July 25, 1914 in Los Angeles, California. He attended the University of California where he was a world class decathlete and a star on the football team. Strode was one of the first African Americans to play in the National Football League, playing for the Los Angeles Rams in 1946.

Strode made his big screen debut in 1941 in “Sundown,” but is best remembered for his performances in the 1960 films “Spartacus” and “Sergeant Rutledge.” He remained a visible character actor throughout the 1970s and 1980s. His last film was “The Quick and the Dead” (1995) which was released after his death.

He also wrote a biography, Goal Dust: The Warm and Candid Memoirs of a Pioneer Black Athlete and Actor, published in 1993.