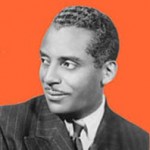 Sissle was born July 10, 1889 in Indianapolis, Indiana. At an early age, he started singing in the church choir and as a teenager toured the Midwest as part of a gospel quartet. In 1915, he met Eubie Blake and they formed a vaudeville musical duo, The Dixie Duo. Although their act contained some of the stereotypes of the day, they refused to wear blackface.

In 1921, they premiered “Shuffle Along,” which became the first hit musical on Broadway written by and about African Americans. They also produced the musical “Chocolate Dandies” in 1924. Sissle and Blake then toured Europe as the American Ambassadors of Syncopation. After breaking up with Blake, Sissle enjoyed a successful career as a bandleader of several bands during the 1930s and 1940s. “Reminiscing With Sissle and Blake” (2000) recounts the lives and music of Sissle and Blake.