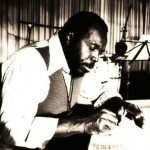 Jones was a self taught musician and began playing professionally at the age of 16. He served in the United States Army band from 1943 to 1946.

In 1954, Jones joined the Count Basie Orchestra where he contributed more than 20 arrangements and compositions. In 1956, he won the Down Beat New Star Award. Jones left the Basie Orchestra in 1963 to become a freelance arranger and studio musician. In 1965, he co-founded the Thad Jones/ Mel Lewis Orchestra. They played together for twelve years, winning the 1978 Grammy Award for Best Jazz Instrumental Performance – Big Band for their album “Live in Munich.”

In 1978, Jones moved to Copenhagen, Denmark where he composed for the Danish Radio Big Band and taught jazz at the Royal Danish Conservatory. He returned to the United States in 1985 to lead the Basie Orchestra after Basie’s death. Jones died August 21, 1986 and was posthumously inducted into the Down Beat Jazz Hall of Fame in 1987.