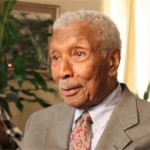 After completing his wartime service in the United States Army Air Corps, in 1944 Carter went to work as a legal assistant to Thurgood Marshall at the NAACP Legal Defense Fund. In 1945, he became assistant special counsel at the LDF and in 1956 Carter became general counsel of the NAACP, a position he held until 1968. During his tenure, Carter won 21 of the 22 cases that he argued or co-argued before the United States Supreme Court.

In 1972, Carter was appointed Judge of the U.S. District Court for the Southern District of New York. Carter was awarded the Presidential Medal of Freedom, the highest civilian award in the U.S., in 1995 and the NAACP Spingarn Medal in 2004. He published his autobiography, “A Matter of Law: A Memoir of Struggle in the Cause of Equal Rights,” in 2005 and died January 3, 2012.