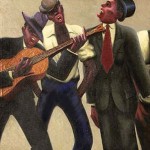 Motley was born October 7, 1891 in New Orleans, Louisiana. He studied painting at the School of Art Institute of Chicago and graduated in 1918. His painting “Mending Socks” was voted the most popular work in a 1927 exhibit of works by living American painters.

In 1928, Motley was presented the Harmon Foundation Award and became the first African American to have a one man exhibit in New York City. In 1929, he won a Guggenheim Fellowship and studied in France for a year. Motley was highly interested in skin tone and did numerous portraits documenting women of varying African American blood quantities. These portraits celebrate skin tone as something diverse, inclusive, and pluralistic.

His night and crowd scenes, heavily influenced by jazz culture, are the most popular as they depict a vivid urban black culture that bore little resemblance to the conventional and marginalizing rustic images of black southerners so popular at the time. Other works by Motley include “Blues” (1929) and “Playing Poker” (1933) and his work is included in the collections of the Art Institute of Chicago and the Howard University Art Collection.