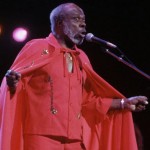 Thomas was born March 27, 1917 in Cayce, Mississippi, but grew up in Memphis, Tennessee. By the age of ten he was performing in amateur productions. For 22 years until 1963, Thomas worked in a textile plant while pursuing a career as a professional entertainer.