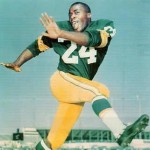 Wood played college football at the University of Southern California where he was the first African American quarterback in Pacific-10 Conference history. Wood was not selected in the 1960 NFL Draft but was signed by the Green Bay Packers as a free agent.

Over his 12 season professional career, he was an eight-time Pro Bowl selection. Wood was selected to the NFL 1960s All-Decade Team and was inducted into the Pro Football Hall of Fame in 1989. In 1973, Wood was named head coach of the Philadelphia Bell of the World Football League, making him the first African American head coach in the modern era of professional football. In 1980, he was hired as head coach of the Toronto Argonauts, making him the first black head coach in the Canadian Football League.