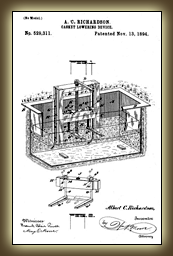 His invention provided a simple and inexpensive churn capable of readily converting the lacteal fluid into butter and delivering the same upon a suitable plate for convenient removal.

Not much else is known of Richardson’s life.