By Chimsima Zuhri on May 5, 2011 in African American History, Author, May, Religion 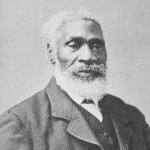 Henson was born enslaved on June 15, 1789 in Charles County, Maryland. In 1830, after trying to buy his freedom and being cheated out of his money, Henson escaped with his wife and children to Canada. After arriving in Ontario, he founded The Dawn Settlement and a laborer’s school for other previously enslaved fugitives.

The settlement prospered, reaching a population of 500 and exporting lumber to the United States and Britain. Henson also became a Methodist preacher, abolitionist, and served in the Canadian army as an officer. Henson had three autobiographies published, “The Life of Josiah Henson, Formerly a Slave, Now an Inhabitant of Canada, as narrated by Him” (1849), “Truth Stranger Than Fiction, Father Henson’s Story of His Own Life” (1858), and “Uncle Tom’s Story of His Life: An Autobiography of the Rev. Josiah Henson” (1876).

Henson was the first black man to be featured on a Canadian stamp and he also was recognized by the Historic Sites and Monuments Board of Canada in 1999 as a National Historic Person. A federal plaque honoring him is located in the Henson family cemetery.