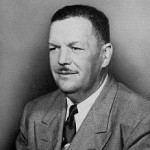 January 11, 1966 Vernon Ferdinand Dahmer, Sr., civil rights leader, died from injuries received the prior day when his home was firebombed.

Dahmer was born March 10, 1908 in Forrest County, Mississippi. A successful businessman, Dahmer owned a store, a sawmill, and a 200 acre farm. He served several terms as president of the Forrest County Chapter of the NAACP and led voter registration drives during the 1960s. He also helped other African Americans pay their poll tax for the right to vote.

On the night of January 10, 1966, his home was firebombed. His wife and children escaped, but he was severely burned and died the following day. Authorities indicted 14 men, most with Ku Klux Klan connections, for the attack on Dahmer’s home. Four were convicted and one entered a guilty plea. In 1998, Ku Klux Klan Imperial Wizard Sam Bowers was convicted for his involvement in the crime and sentenced to life in prison. He died in prison in 2006. Vernon Dahmer Park in Hattiesburg, Mississippi is named in his honor.